The top of Hurd Peak is a little above our climbing ability, so instead we did a hiking loop around the summit with some class 2 scrambling and incredible views. The route starts at South Lake following the Treasure Lakes trail until it plays out. From there it's cross-country to Hurd Col just below the summit and down to Margaret Lake. We stayed cross-country down the length on the west side of the overly popular Long Lake to the outlet. From there it was easy trail back to the car. Getting up and over Hurd Col takes some route-finding to avoid the abundant granite cliffs, but it isn't difficult. The views from the col are simply amazing: the west the Treasure Lakes basin and surrounding peaks; to the east the incredible Inconsolable Range including the peak we bagged last week - Cloudripper. We really enjoyed the unique views of Chocolate Peak with it's fascinating geology and beautiful colors. We'll have to tag that peak top in the not too distant future.

Bob, Hikin' Bill and I headed out for a repeat adventure.  We first hiked to Mt Hoffmann in Yosemite back in 2010.  This time I had a goal -- complete the summit.  Last time I looked at the sheer fall near the top and decided I would rather live than summit; this time I found an alternate route to the top.  More on that later.

Our original plan for the day was to head to Mt Gibbs, but the smoke forecast did not look favorable, so it was plan B -- Mt Hoffmann, but with a twist.  The twist was a bonus four miles that Bob threw in to make it a "real hike".

We headed off to Yosemite along 395 and found the smoke at Lee Vining.  Fortunately, when we reached Tuolumne, it was clear, or as clear as it is going to get this year.  Our bonus four miles occurred between Highway 120 and the May Lake parking lot.  This was an easy stroll along a little used horse trail with plenty of trees and chickadees.

From May Lake we took the use trail and wandered a bit past the direct route to Hoffmann, but eventually we were on a trail that I recognized and were huffing and puffing up to the rock outcrop that is Hoffmann.  It is not a classic peak, but since it has a name it gets peak-baggers who think they will get to sign a register.  They are disappointed on that account.  The last one hundred feet or so to the top is a nearly vertical rock outcrop.  Knowing that the right edge, which looks easiest, has an exposed drop, I choose to work the center of the formation.  I was rewarded with a route that took me up granite ledges to the top and had no sheer drop-offs.

We had nice views from the top including Half Dome, Clouds Rest, Cathedral and Unicorn Peaks, and more distant peaks including Dana and Gibbs.  And yes, the smoke forecast was accurate and we would not have been happy on Gibbs.  We will save that for a day when we will be able to see Mono Lake as our reward. 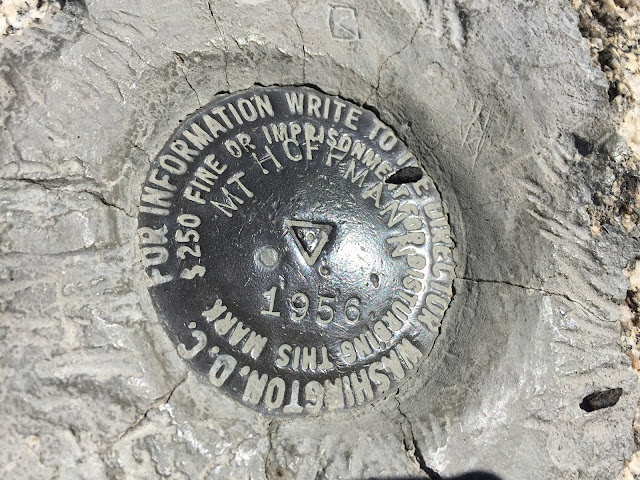 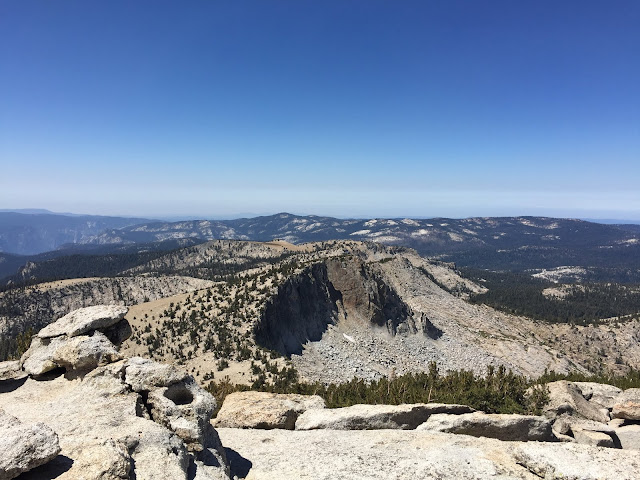 Another bucket list item. We've seen this mountain from about every possible side, off in the distance and close up, from previous hikes. After discovering the summit was within the reach of us hikers, and not as roped up mountaineers - and doable in a day - we decided to go for it. Our friend Chris came along for the ride; it was also a much wanted experience for him. And besides, who wouldn't want to bag a peak with a name as cool as Cloudripper?!

The first part of the hike we had done many times before: from the South Lake trailhead up to Brown and Green Lakes, then up the switchback trail to the plateau near The Hunchback. We had been a little farther before, to an intermediate high point labeled on the map as 12,406. This was all straight-forward hiking, from there it would be new territory for us.


We reached the edge of the plateau, and before climbing up the intermediate ridge forming Vagabond Peak, we stopped at the cliff edge for a magnificent view west.


A quick crossing of the Vagabond ridge (we saved that summit for the return) and we were descending into another plateau between the two peaks.

Gaining another 500 feet elevation to the Cloudripper ridge, we navigated the short Class 2 section and the final very short Class 3 ascent to the summit block.

As expected, the 360 degree view from the 13,525 foot summit was spectacular, even with the abundant smoke from all the nearby forest fires.


Next up on the return was gaining the summit block of Vagabond Peak (13,374 feet elevation), since we had to pass within a hundred yards of it anyway.


Our only real fear for the day was getting caught high and open by an afternoon thunder storm. So when the clouds started getting thick, and the thunder started booming out near Mt. Darwin a few miles away, we made a hasty retreat for lower country. Pretty much retracing our route, we made it to Green Lake and the relative protection of the trees before the lightening moved overhead and the first raindrops fell. Thankfully we hustled back down and made it to the trailhead without any significant rain. What a day!

Posted by Bob Steele at 6:23 PM No comments: