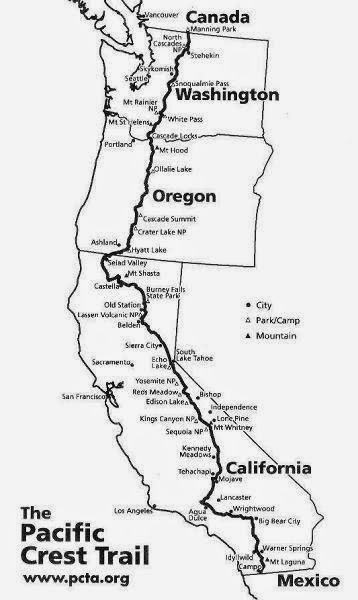 From April 6 to September 17, 2016 we thru-hiked the Pacific Crest Trail (PCT) - a continuous trail from the border of Mexico near the town of Campo, to the Canada border just south of Manning Park, B.C.

This is a really awesome Google mashup interactive map showing the trail from Postholer.com.

To learn about the trail check out the Pacific Crest Trail Association.

“Would you tell me, please, which way I ought to go from here?"
"That depends a good deal on where you want to get to," said the Cat.
"I don't much care where -" said Alice.
"Then it doesn't matter which way you go," said the Cat.
"- so long as I get SOMEWHERE," Alice added as an explanation.
"Oh, you're sure to do that," said the Cat, "if you only walk long enough.”

To jump to the day in this blog where we start the PCT, Click here.

The PCT is nominally 2650 miles, but changes slightly each year with trail changes, fire re-routes, etc.  Plus, there will be some walking to and from resupplies and perhaps a side trip or two.


How long did it take?

We're were aiming for 5 - 6 months and took 5 months, 11 days.  You can't start too early or the higher elevations in the southern California coastal mountain ranges can be impassable.  If you take too long (beyond the end of September) you risk getting snowed out in the northern Cascade mountains. What this means is averaging about over 18 miles per day, not counting rest (zero) and low mileage (nero) days.

We carried our food with us of course, and used mail drops and store purchases at many locations on or near the trail.  The average time between drops was about 5 days.  Our favorite "Trail Angel" Terri handled the logistics from home to make sure we're resupplied at the right time and place.  Thank you Terri!!  It takes a LOT of food to hike 12+ hours a day.  Conservative estimates are 4000 to 6000 calories per day.  Town stops supplement trail food - thru hikers are know to food binge pretty hard in town.

What about everything else?

We carried everything we needed on our backs, using ultralight hiking techniques to keep the load as low reasonably possible.  our base weight (no food or water) was around 10-12 pounds each.

You're gave up birding for 6 months?

No way!  While Bob did not take any photo equipment on the trip, we carried compact binoculars and birded our way to Canada.  Susan used eBird the entire trail (in approximately 5 mile segments) for a total of 656 eBird lists.  We updated this blog each day, and with it posts of our bird lists.

Did you read the book (or see the movie)?

Cheryl Strayed section hiked about 1,100 miles of the PCT in the early 1990's and wrote a biography about personal struggle published in 2012.  It became very popular after being featured by Oprah Winfrey's book club.  A movie was made of the book in 2014.  The popularity of the book and movie has caused a significant increase in the number of hikers starting the trail in 2014 and 2015.  This will likely continue into at least 2016.  Bob read the book (and thought it was OK, but not a hiking book), Susan has not, and neither of us has seen the movie.  We have been backpacking for 30 years and had decided to hike the PCT before either of us had more than heard of the book.

What about wild animals?  Did you carry a gun?

We were in far more danger of running out of water in the desert, or being cold and wet in the Cascades, than being eaten by a mountain lion or bear.   Yogi would rather eat my food than me.  Besides, a gun is heavy...