June 27, 2021. Two islands in one day! We awoke anchored off San Cristóbal Island. A small flock of Elliot's Storm-Petrels were swarming the stern of the boat as we had breakfast. This Galapagos near endemic storm-petrel had been with us off and on for the whole trip. They are common in the Galapagos, and can be occasionally seen off the coast of South America. Watching it's dainty dance on the water at close range was a lot of fun.

Our visit to San Cristóbal was for a specific target bird we needed - the San Cristóbal Mockingbird. This island is a tourist destination, with a usually busy port and lots of tourist shops and such. On our arrival we boarded a few pickup trucks for a short drive into the highlands and the local cemetery. This is typically the best spot to see the mockingbird. Not so much on the day we were there. After scouring the cemetery with no luck, we walked along the road for a while. Still nothing... Uh oh... Back in the vehicles we drove farther into the highlands. Ripping up the paved road at a pretty good clip and scanning the sides of the road, several folks started screaming out, "mockingbird!" There were two birds perched on a utility wire. Our driver slammed on the brakes and the two vehicles behind us did the same. The vehicle in front of us had missed them and kept going. Luckily they noticed nobody behind them quickly enough, and turned around. We all piled out and stood in the middle of the road admiring a new life bird (actually, a bunch of them). We hung around in the drizzling rain for long enough for good looks, then headed back down the hill. Mission accomplished! 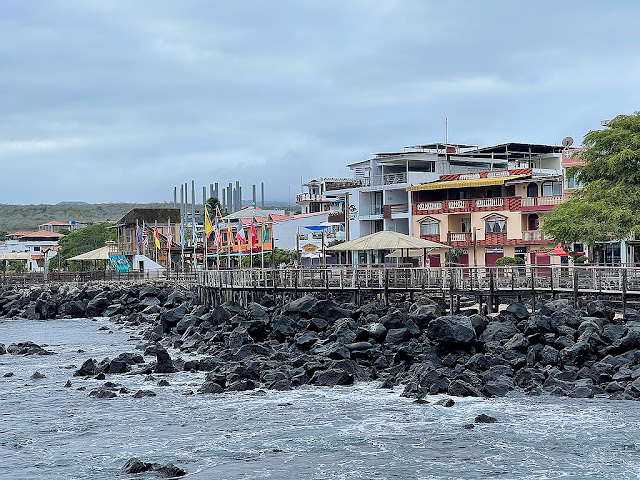 We spent and hour back at the port town being tourists and supporting the local economy. When we were there in June, tourism had just opened back up and visitors had been few. The local shops were glad to see us and even happier that we spent some money!

We were nowhere near done for the day. Back on the big boat we motored on to the close by Santa Fé Island. This small island has no human inhabitants, but it does have birds, a really cool reptile, and great snorkeling.

The Santa Fé Land Iguana can grow to three feet long and weigh as much as 25 lbs. While it may look like a carnivorous dinosaur, they are herbivores eating mostly cactus leaves. 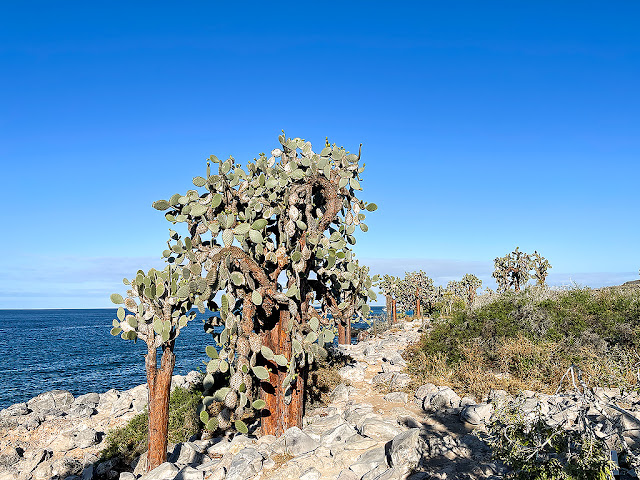 And we got to go swimming just off-shore, near some rocks, with many sea lions - too much fun! When you watch the video, keep an eye out for the big alpha male. What a beast! 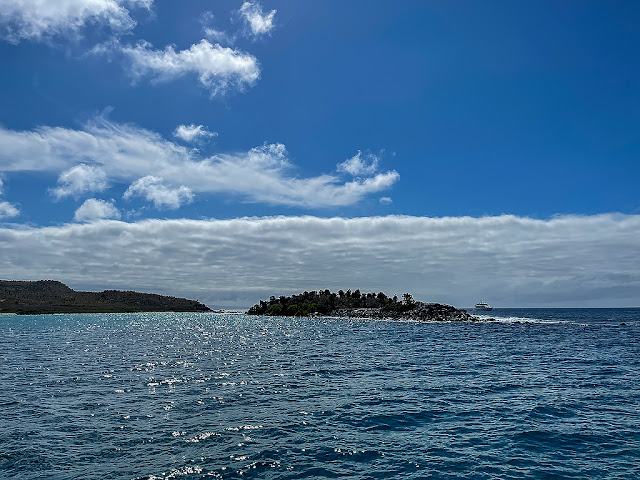 On to Santa Cruz Island!
Posted by Bob Steele at 1:47 PM No comments:

June 25, 2021. This was a really exciting day for me, and I'd guess most of the folks on the trip. This was the day we would get to see the Galapagos endemic breeding Waved Albatross. They get their name from the waved pattern of the feathers on the side of the bird.

We had arrived at Espaňola Island and were ready to go ashore. Those of us who arrived to the island in the first zodiac shuttle had a few minutes to wait for the rest. It wasn't long before we discovered the friendly habits of the Espaňola Mockingbird. By far the tamest of all Galapagos mockingbird species, these guys immediately came right up to us to say hello. They were pretty friendly with the marine iguanas as well as we watched them forage on the reptiles for what I guess were parasites. 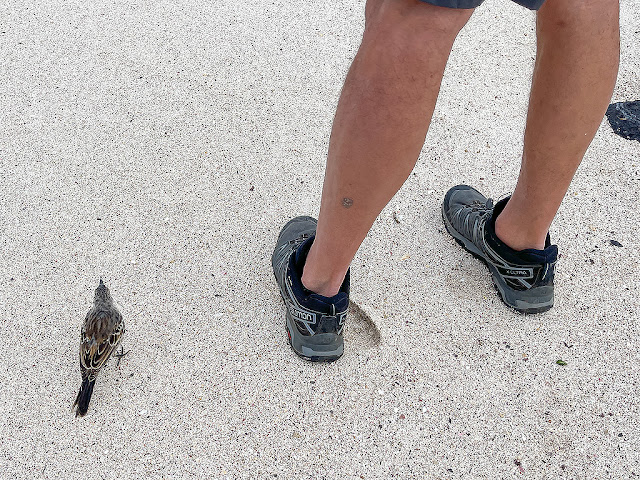 We had landed at Punta Suarez. Once everyone was ashore we started our walk toward the other end of the point. This was only the edge of the albatross breeding colony (most was off-limits) but it was enough. There were lots of albatross, and other great things to see, most just off the trail for easy viewing. At the far end of our walk we arrived at a sea cliff, with spectacular views of the lava cliffs and soaring seabirds. There was a fantastic blowhole in the cliff that erupted every time a wave crashed in. Along the way we picked up another of the Darwin Finches, this time the Espaňola Ground-Finch. And we got by far our best looks at Galapagos Hawk, including a nesting bird not far off the trail. There were hundreds of marine iguanas, some lounging on the rocks, some swimming in the crashing waves as they made their way to or from their feeding areas underwater. We spent all morning on the island soaking in the sights. 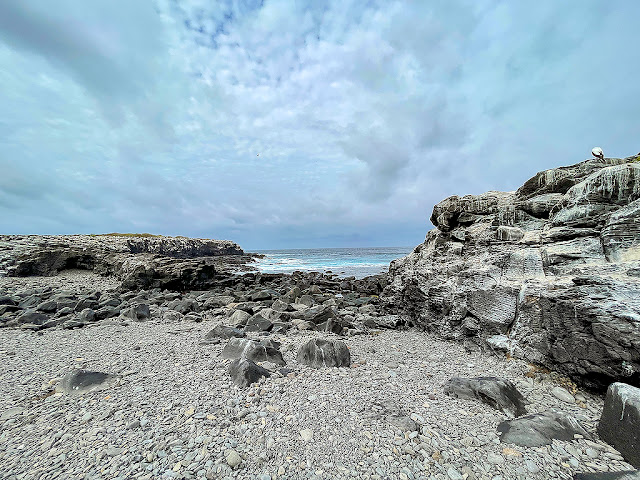 Video of blowhole at the cliffs
If the video isn't visible, click HERE

On the way back we stopped to admire the mockingbirds again. They were just so tame! 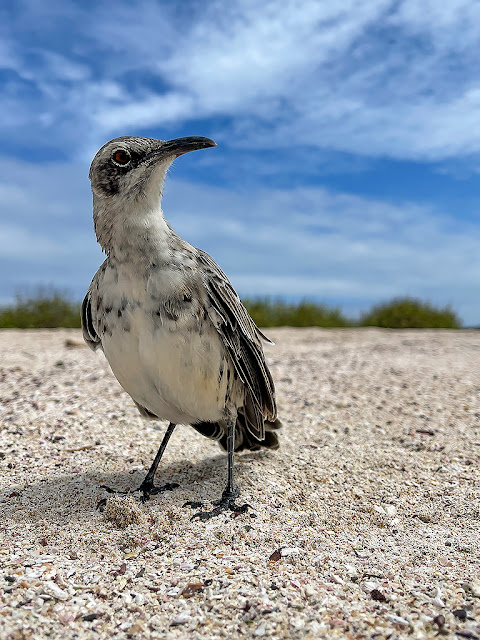 And we got some really great looks at a few of the American Oystercatchers that hang out here.

One of the rarer mammals on the islands is the Galapagos Fur Seal. They are much more difficult to spot that the abundant sea lions. We got a good look at a couple of basking animals during our walk.

After lunch we cruised the big boat around to Gardner Bay. Here we did a great snorkel around some small rocky islets just offshore. This video shows some of the great sights we had while swimming, even if the weather wasn't very cooperative. Of note in the video besides the abundant fish: we had two Golden Rays (how beautiful!), a White-tipped Reef Shark, a diving Blue-footed Booby that I was able to get some decent video of as he crashed into the water, and a sea turtle taking a nap on the bottom. Too much fun!

Video of snorkeling at Espanola Island

And then it was time to go: our next destination was San Cristobal Island.

Posted by Bob Steele at 3:14 PM No comments:

Floreana Island has a long and interesting human history in the Galapagos Islands. If you've read the first-hand account, "Floreana: A Woman's Pilgrimage to the Galapagos," then you know what I mean. Prior to European settlement, pirates stopped at the island for the reliable source of fresh water and to hunt tortoises. The pirate caves still exist today. Unfortunately, the Floreana Island Tortoise is now extinct, and the Floreana Mockingbird has been extirpated from the main island. Thankfully the mockingbird still exists in tiny numbers on a couple of nearby small islands. And there is an attempt being made to resurrect the extinct tortoise. During the pirate days, some Floreana tortoises taken from the island were abandoned near the Wolf Volcano on Isabella Island. While no pure Floreana Tortoises exist, a number of tortoises at Wolf have been found that have significant genetic ancestry. A special breeding program has been undertaken to attempt bring tortoises back to Floreana.

Our goal for the morning was to visit the highlands of the shield volcano to see the remnants of early habitation, pick up some new bird species (Medium Tree-Finch is endemic to the island), and visit the tortoise compound where the former personal pets of the locals are now kept. While seeing these captive tortoises at very close range was very cool, we would have to wait until later in the trip to see some wild ones. 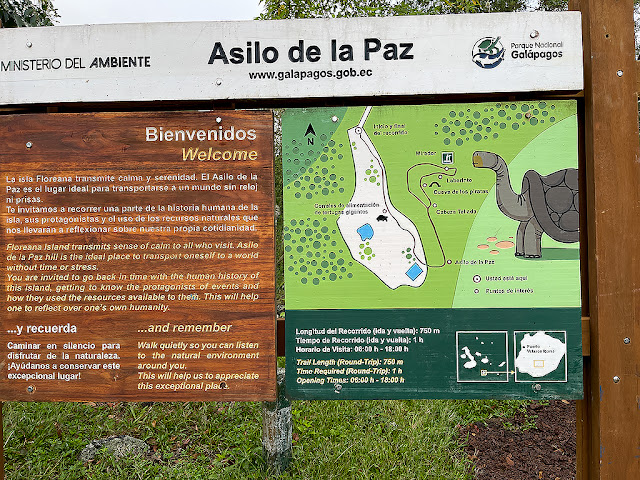 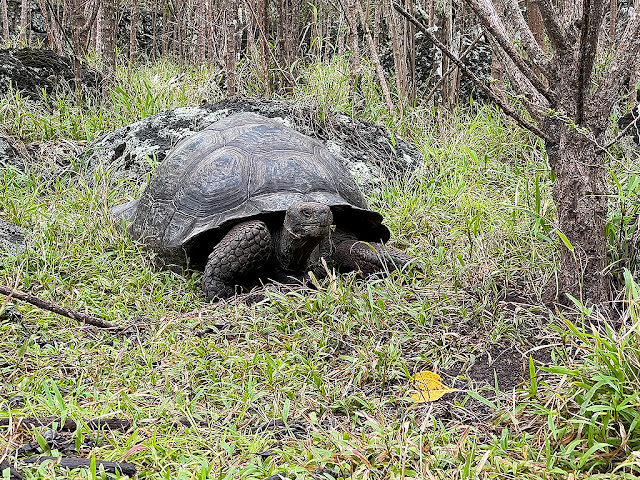 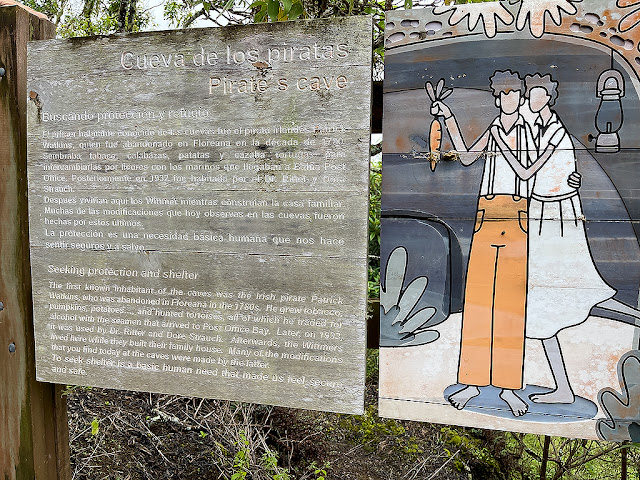 Returning to the lowlands we visited the small town. One of the hotels is still run by the descendants of the original Wittmer family and we stopped in. The Blue-footed Boobies were hunting fish right off shore and gave us a great show with their arrow-like diving into the shallows. 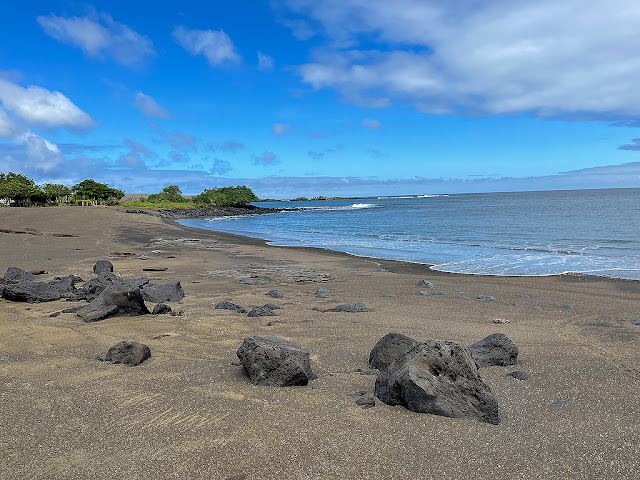 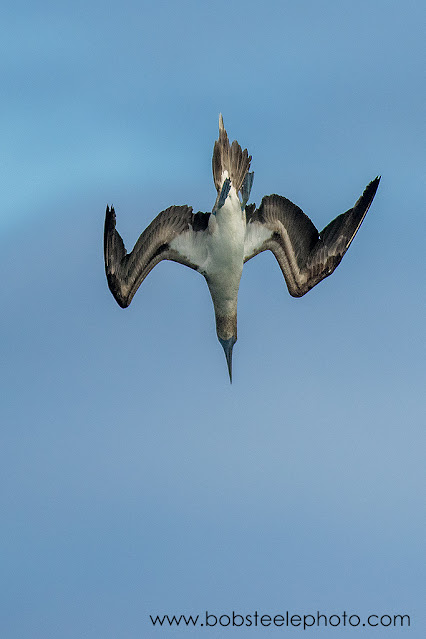 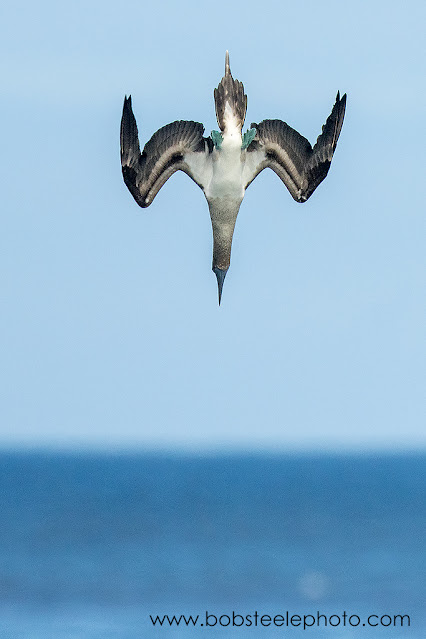 After lunch we cruised the big boat around to the south side of the island at Punta Cormorant for a walk past a lagoon. From here, in the near distance, we could see the two small islets where we would get our chance for the endangered Floreana Mockingbird. 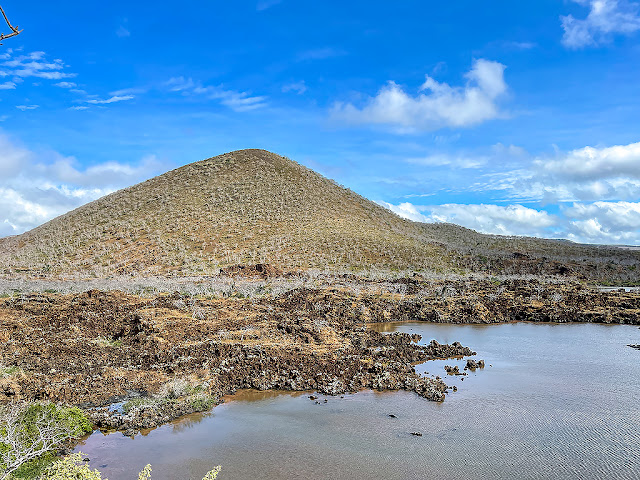 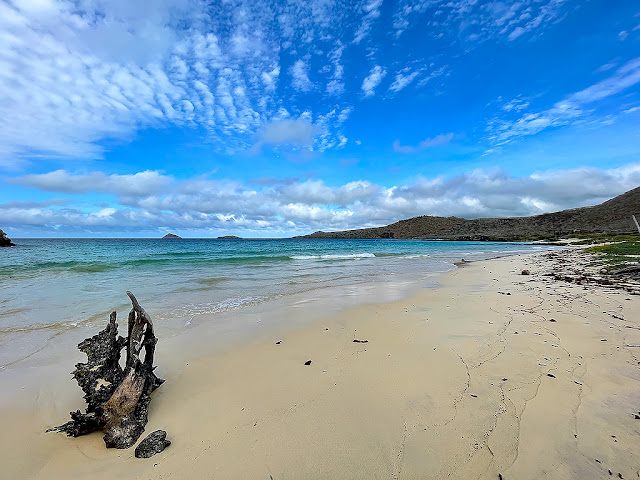 And then it was time to visit Isla Champion and look for mockingbirds. The Floreana Mockingbird is thought to be Darwin's inspiration for the Origin of Species when he noticed how much different it was to the other mockingbirds species he had seen on other islands. At about 250 individuals on these two islets, it is endangered - but the population is stable.

We couldn't land on Champion, so the captain showed is skills and put the big boat within about 50 yards of the island. Fighting the intense current, he kept us close enough to search the cacti for birds. Everyone stood on the bow and scanned anxiously. And then we saw one, and then two birds. Awesome.

As we moved away from the island, we passed near a feeding frenzy. There were frigatebirds, shearwaters, noddies, and boobies going hard after a school of baitfish. Even the tuna were getting in the action. Watch this video to see the action, occasionally a tuna crashes the surface going after the small fish.

And, as reminder to email subscribers, if you can't see the videos in the email, click the "View this email in your browser" link at the top.