A week ago in Yosemite we were hiking in cold rain and snow.  On Saturday we had sun and close to 90F in the afternoon!  To test our trail legs we chose a loop hike that took us out of Kennedy Meadows at 6,200 feet elevation climbing up the old Wildrose trail to near Haiwee Pass where we hiked to from the east side just 2 weeks ago.  The start saw us hiking through pinyon pine and a few scattered oaks with very good birding.  Within a hundred yards of where we parked the car we had a singing Plumbeous Vireo who offered excellent views.  Other pinyon forest birds were seen including Black-headed Grosbeak, Oak Titmouse and Black-throated Gray Warbler.  About half way up the climb we passed through Wildrose meadow where a family flock of Bell's Sparrows flitted about.

As we continued higher we passed through the 2008 Clover Fire burn with the expected fire loving species like Hairy Woodpecker, Chipping Sparrow and Western Bluebird.  Anywhere there was a trickle of water from a spring or seep had a singing Lazuli Bunting.


We reached 8,000 feet elevation, a short distance below Haiwee Pass and turned and dropped elevation toward the South Fork of the Kern River.  In this drought year, even with the recent rain and snow in the high country, the Kern was hardly more than a trickle.


The climb out of the river canyon at 7,400 feet to the ridge was long and hot.  We passed through Dutch John Flat where a pair of Williamson's Sapsuckers knocked about in a stand of Jeffrey Pines. A Calliope Hummingbird perched from a willow near a seep.  As we moved higher toward the top of the ridge, the view east toward the Sierra crest opened up.

We reached the the ridge at 8,600 feet and started the descent to the PCT where we reentered the burn.  The tree skeletons had a ghostly look.


It was a long hot descent down the PCT to Kennedy Meadows with very little shade inside the heat trapping canyon.  The recent heat wave and lower elevation made for some slow going.  It is near the peak of PCT thru hikers passing this way going north so we had lots of company as we moved downhill.  We crossed the Kern one last time two miles from the Kennedy Meadows campground.  A mile and a half road walk from the campground to the car at the Wildrose trailhead was a punishing end to a long day.


Thursday, May 21 - More Rain Than Forecast


We knew going in the weather would be dodgy for a couple days with one quarter inch or less in the forecast for Thursday and Friday. What's the old saying: there are two professions where you can be wrong most of the time and still get paid - economist and weatherman. Little did we know how wrong they would be...

We headed across the dam Thursday late morning under partly cloudy skies and cool temps. The 1200 foot climb up the canyon wall was pleasant with many birds and a few flowers still holding on at the low elevation. 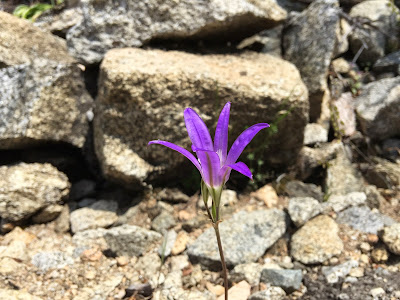 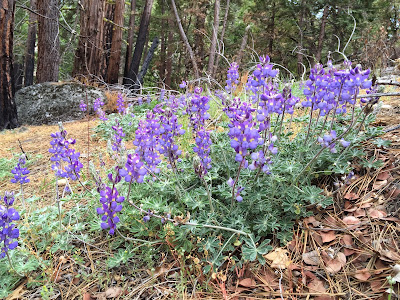 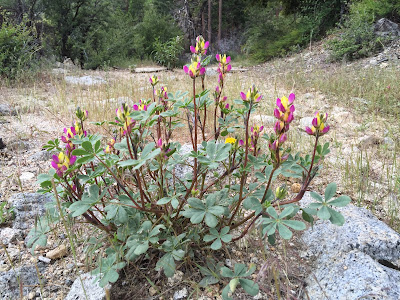 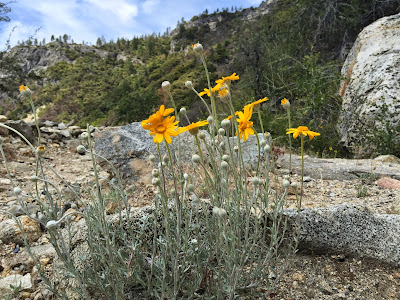 Western Tanagers and Cassin's Vireos in the oaks were regular and Canyon Wrens called from the cliffs above. Our first destination was Beehive Meadow and then a mile long side trail to check out Laurel Lake. Then it would be on to Vernon Lake for the evening. Clearing the big canyon wall the climb flattened some, steadily gaining altitude until we reached the meadow at 6,000 feet. The first sprinkles dropped from the sky as we reached the turn to Laurel Lake.

Half way to the lake we reached a stream crossing that was little more than ankle deep. As we approached the lake shoreline the rain became more serious and the cloud level dropped. We considered continuing on to Vernon just long enough for the rain to intensify to a downpour. Up went the tent quickly and in we went. Three hours later the rain finally let up so we could make some dinner and check out the birds around the lake. Like us the birds were happy the rain had stopped. Along the shore a Western Wood-Pewee was flycatching defending the space from a Yellow-rumped Warbler. White-headed Woodpeckers tapped and called in the trees around camp. Two pairs of Buffleheads appeared to have set up shop at the lake. It was a nice finish to a wet day.

The morning was cool and damp with fog hanging over the lake. We packed up and made our way back toward the main trail. At the creek crossing we were in for a surprise - yesterday's ankle deep ford was now a waist deep raging river.  It took a while but we worked our way across with a combination of logs, rocks and wading. It was a slow start to the day. 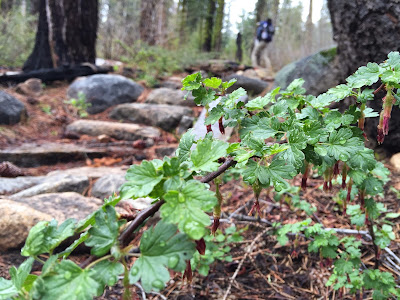 Foolishly hoping for better weather we decided to bypass Vernon Lake and traverse Moraine Ridge to Jack Main Canyon and on to Wilma Lake or possibly even Tilden Lake at 9,000 feet elevation. The ridge was good hiking through a mixture of Jeffrey Pine, Lodgepole and White Fir. At the end of the moraine the trail started our descent into Jack Main Canyon. Right from the top we discovered what a bunch of rain falling on granite can do. The trail was a raging river and we had to go down it. There comes a time when you just give up having dry feet and go for it.

At the bottom of the descent we came to Falls Creek - this would be our companion until tomorrow. As we walked along the canyon floor flooding was everywhere. We proclaimed: Jack Canyon, where the trail is a stream, creek, river, pond, lake, and swamp. We saw it all. By 3pm the rain started again, and even though we were short of our goal for the day, we threw in the towel and pitched the tent. Another 3 hour wait before it let up enough to get out and cook dinner. By bedtime the rain would start again and go all night...

We awoke to drizzle and 38 degrees but had to get going. After a quick breakfast we chucked everything in the packs, donned our rain gear and continued up Jack Main Canyon. Falls Creek is aptly named, for the next 3 miles we were entertained with lovely cascades and falls. Wilson's, MacGillivray's and Yellow-rumped Warblers were regulars. Probably the most common bird in the canyon was Brown Creeper - seemingly calling from every other tree. 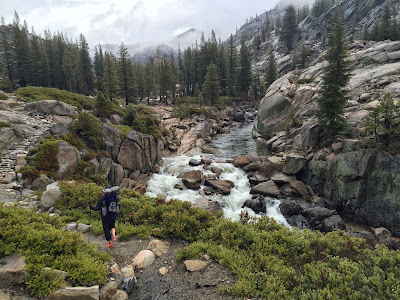 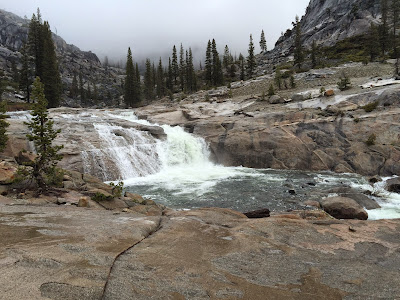 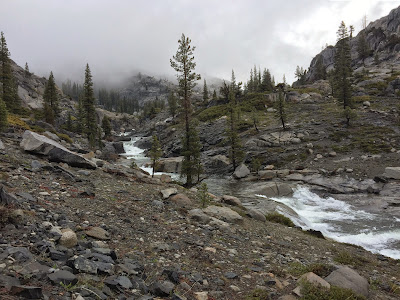 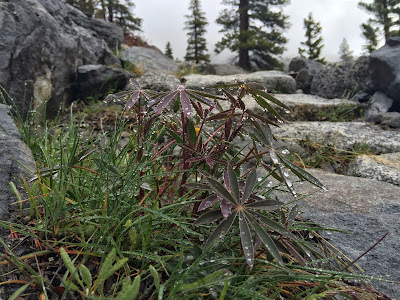 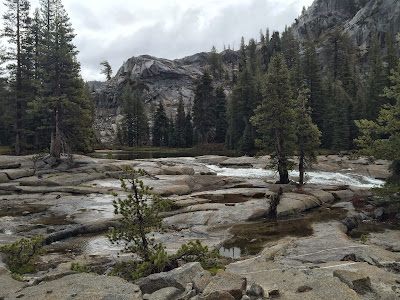 At the top of the climb the trail leveled out and we came to an intersection. If we continued up canyon to Tilden Lake, the climb would take us to over 9,000 feet and likely lots of snow. As it was still raining, we made the decision to turn onto the Pacific Crest Trail, past Wilma Lake for a couple miles, then we could turn and start the return toward Hetch Hetchy and the big waterfalls. Only one minor problem - we had to cross Falls Creek. It was cold!

The section of PCT trail took us up over 8,500 feet where snow covered sections of the path. At the next junction we turned into Tilden Canyon where on a clear day the views would have been spectacular. After a short descent we climbed over another 8,500 foot ridge beside Tiltill Mountain, trashing through lots of snow covered trail before beginning the long 3,000 foot descent to Tiltill Valley. Birds were all but absent in a steady rain. Reaching the valley floor  brought us to a very wet meadow that had to be crossed. Calf deep water was our trail for the next half mile. 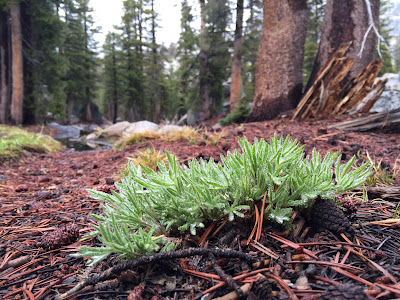 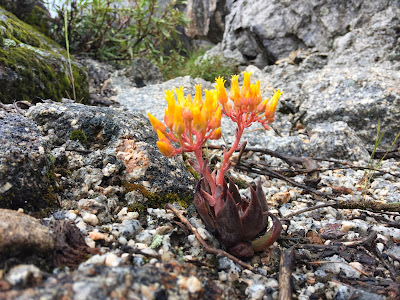 The last section was the final 1,000 foot descent to Rancheria Falls and and our home for the night. In between showers we had Wrentit, Bushtits and a Yellow Warbler. Tomorrow we can only hope for some descent weather as we see some spectacular waterfalls.

We saved the best for last - the big waterfalls dropping into Hetch Hetchy up canyon from the dam.  While it sure didn’t seem so great at the time, that abundant rain of the previous few days added significant runoff to the creeks and streams, improving waterfall volume to the point of spectacular, even with the drought.


We were awoken by an insistent Western Tanager singing directly over the tent. He was joined by an equally noisy Cassin's Vireo in duet making certain we were up and moving. What did we find above but blue sky, the first we had seen since Thursday!  During breakfast we were joined by a Hermit Warbler, a new one for the trip. Packed up, our first stop was only minutes away - the big cascading falls of Rancheria. 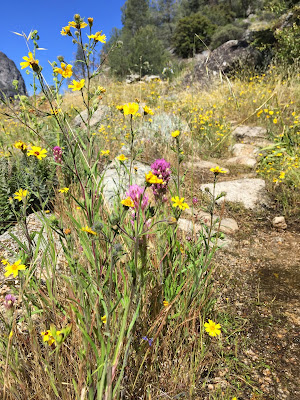 From there we continued down canyon to the reservoir, through an old burn on a dry hillside, picking up Wrentit, Lazuli Bunting, and a soaring Black Swift.  The trail turned toward the dam a couple hundred feet above the lake meandering through stands of mixed oak and Gray Pines. The cliffs above were host to many White-throated Swifts who constantly twittered right above our heads. Nearly every pocket of oaks held at least one Cassin's Vireo or Hutton's Vireo, sometimes both. The well watered flowers put on a show along the trail. 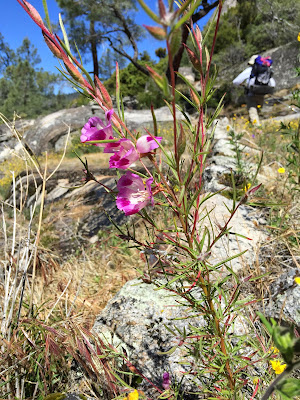 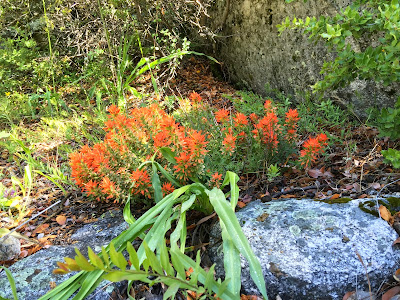 After a few miles we were at the star of the show - Wapama Falls. Parts of this falls can be seen from the dam but the true view is from the base. Five bridge cross the cascades at the bottom giving amazing views to the top. We had lunch at the end of one bridge soaking in the spectacle.

Just down the trail we had our best view of Tueeulala Falls, a ribbon of water shooting off the top of the canyon. This falls only presents during the highest runoff of spring. Other smaller bonus waterfalls were scattered along the cliffs, all because of the recent rain. For the last few miles to the dam we were entertained by numerous Canyon Wrens and Lazuli Buntings. Arriving at the car we noticed the thunder clouds building over the crest and were glad to be heading out to civilization and real food.

For now the map page tab (Where We Are) above shows the route, at least until I record another hike

Posted by Bob Steele at 8:37 PM No comments: