Mount Jenkins is one of the major peaks along the Southern Sierra Crest in the Indian Wells Valley, second only to Owens Peak in height. It was named in 1984 for Jim Jenkins who scouted the Pacific Crest Trail route through the area in the 1960s. There are several ways to get to the base of the final climb, we chose the PCT from Walker Pass to increase the hiking miles. The trail leaves Walker Pass at 5,200 feet elevation and climbs steadily to a saddle on the crest, leaving Freeman Canyon at an elevation of 6,200 feet to the west side for the next couple miles. At the car we heard a vocal and unexpected California Thrasher calling from the mixed Pinyon and Joshua Tree forest across the highway, and a large flock of raucous Pinyon Jays passed overhead as we ascended the first few hundred yards of the trail. Before we made it to the crest and into the west side oak trees, a calling Oak Titmouse surprised us from the pinyons. Dozens of White-crowned Sparrows and Dark-eyed Juncos flitted about the scrub and trees constantly.
Crossing the crest the view opens to the west with the Kern Plateau and Domeland Wilderness dominating the view. The trail continues its climb on the west side, crossing back to the east side about 5 miles from the trailhead at another saddle (6,500 feet) near Morris Peak. Great views of Indian Wells Canyon and beyond are to be had for the next couple miles. It was in this stretch that we got our first taste of what was to come with a decent sized flock of about a dozen southbound Steller's Jays passing by overhead. Migrating birds use the uplift of mountain ranges to aid their flight. During our ascent and while on top we would observe at least 4 separate groups of jays passing by, including a flock of 8 Clark's Nutcrackers, and a single Evening Grosbeak who paused on a rock for a good look before continuing on to the south. It was fascinating to see migration in action with all these montane species passing by us.

A good use trail takes off from the PCT at the north end of the ridge extending down from Mt. Jenkins and is certainly the easiest way to make the summit. There is some Class 2 scrambling to be done in the .75 mile approach to the summit block, then a few class 3 moves to reach the final summit. Even the severely acrophobic Susan made the top without much trouble as the exposure was minimal.


The view from the top was spectacular as expected. To the immediate north was Owens Peak, farther away we could see the lightly snow covered Mt. Langley and Mt. Whitney. The view east included Indian Wells Canyon and Valley, and the mountain ranges beyond. After a rest and some lunch we backtracked the route to the car for an early afternoon arrival.

There is never a bad time for a hike to Thousand Island Lake, but timing it for fall colors or snow on the high peaks can improve the already amazing scenery. With this in mind, Susan and I took off on the High Trail (PCT) from Agnew Meadow for a loop that would hit about as many of the great views as you could expect from a single day hike. We got an early start and watched the sun rise on the Sierra Crest across the San Joaquin River canyon. We were greeted almost immediately by a nice flock of noisy Evening Grosbeaks in the mixed firs and pines. After a short but steep climb the trail levels out for the long traverse to the head of the canyon near Agnew Pass. Along the way the view across canyon is spectacular, particularly the view down into Shadow Lake with the Minarets, Mt. Ritter and Banner Peak behind.

Traversing the canyon wall, hundreds of feet above the river, we passed numerous stands of spectacular peak color Aspens. 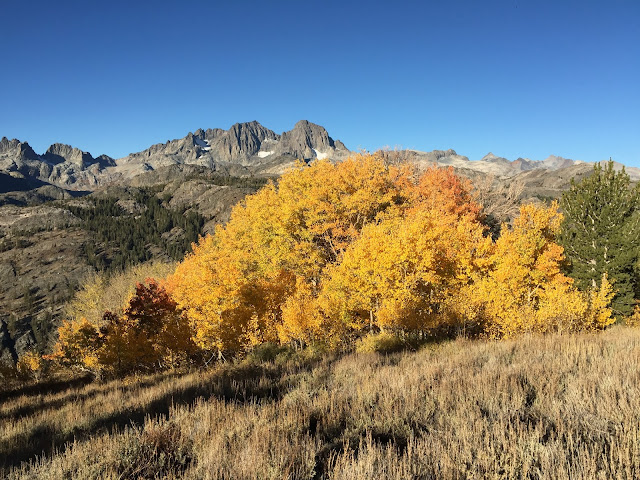 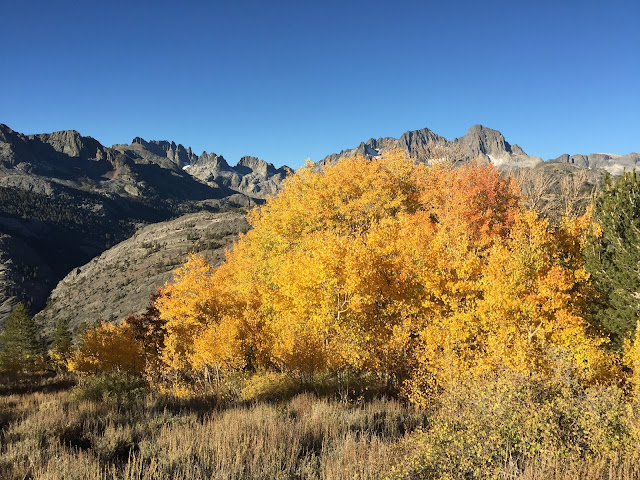 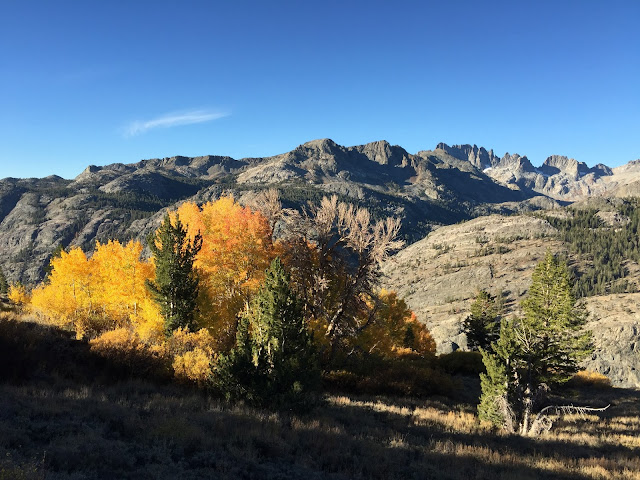 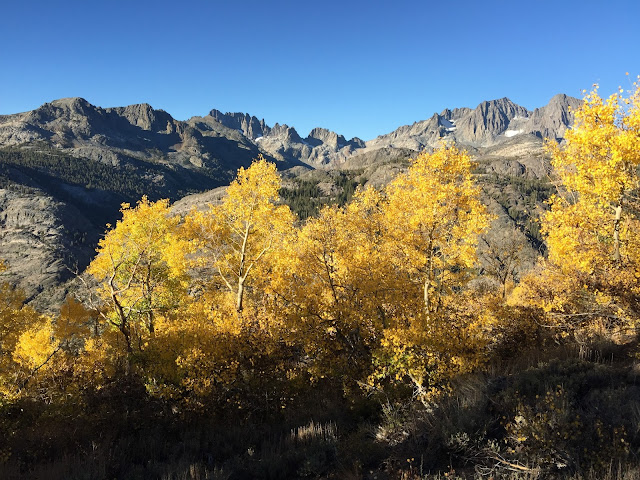 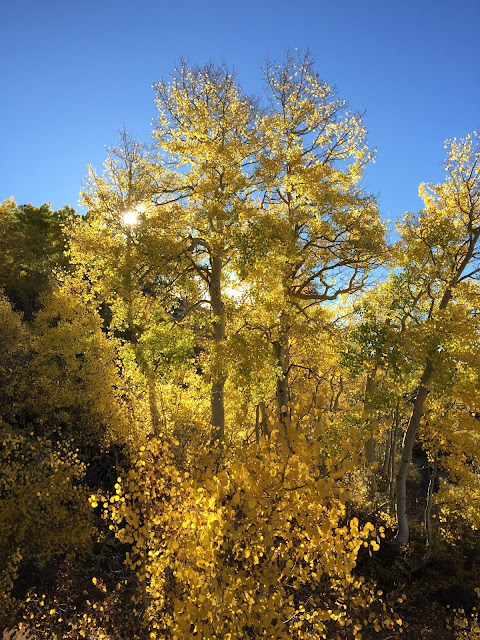 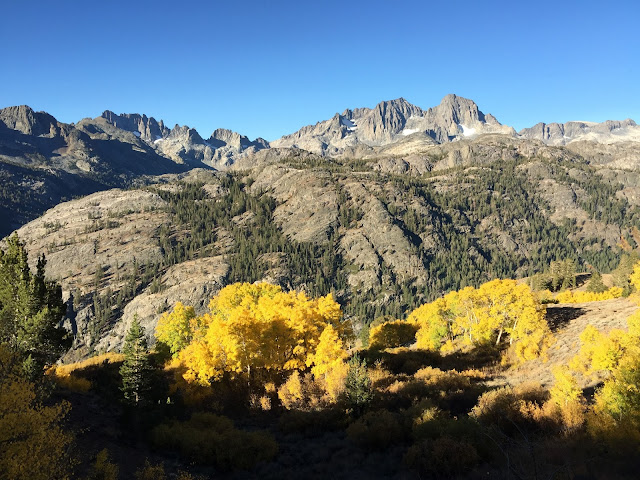 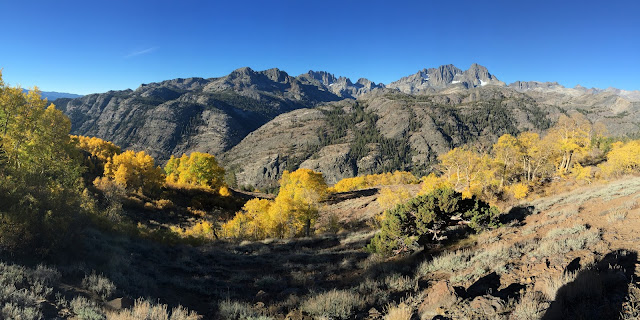 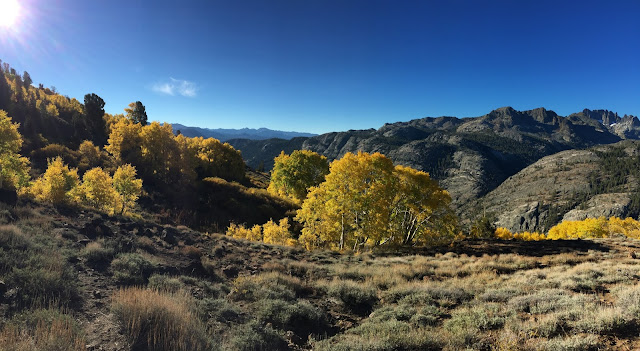 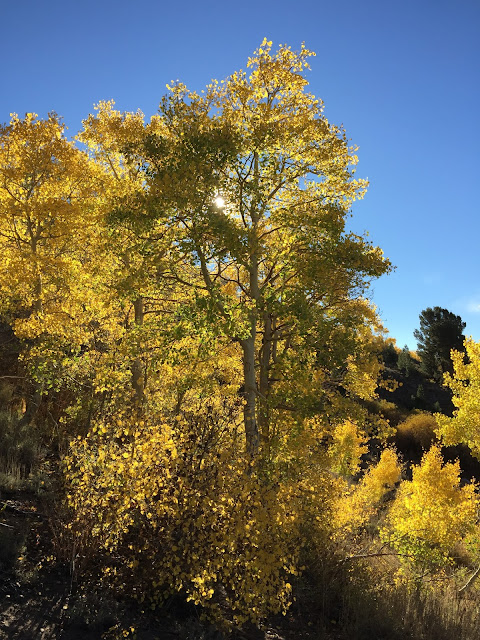 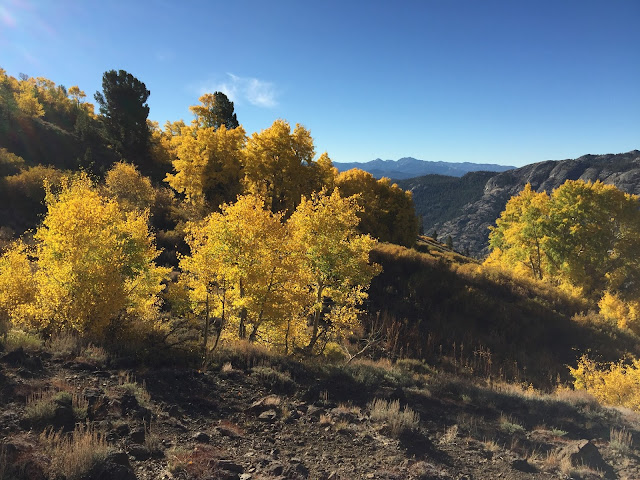 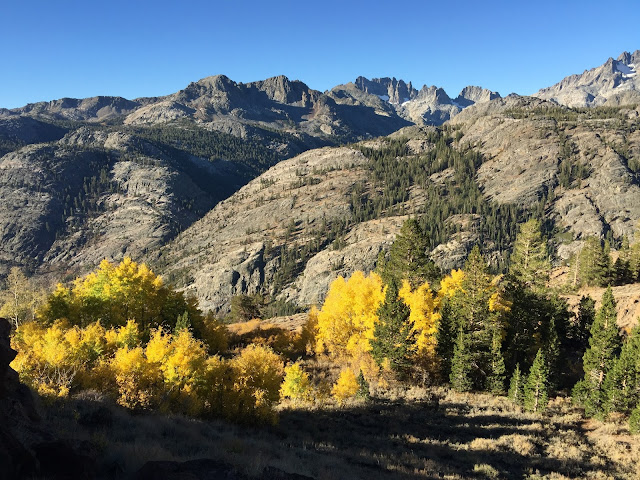 The trail wraps around the head of the canyon finally arriving at Thousand Island Lake - always a favorite of mine. It was over 30 years ago that my uncle took me on my first backpacking trip here, so besides the spectacular view across the lake to Banner Peak, it holds special memories for me. After an early lunch break we headed south on the John Muir Trail to continue the loop.


The JMT crosses a couple of low ridges, passing two small lakes, before arriving at another Sierra gem - Garnet Lake.


We dropped down the steep but short trail segment from the outlet of Garnet Lake to the river trail, and walked the pleasant remaining miles back to Agnew Meadow.

Posted by Bob Steele at 5:51 PM No comments:

Bob and I needed to get a bit of exercise, but due to all the flooding and road closures, didn’t want to head to far afield.  So, we decided to fill an ebird gap and headed to Indian Wells Canyon.  Indian Wells is a well worked location, for an east side canyon that is, with 135 species on its list.  It has a diversity of habitats ranging from the valley floor creosote, into Joshua trees, pinyon and gray pines.

We started our hike in the Joshua trees and headed up to the BLM mining interpretive area.  Along the way we found Ladder-backed Woodpecker, but could not come up with the other regular of the Joshua trees, Cactus Wren. 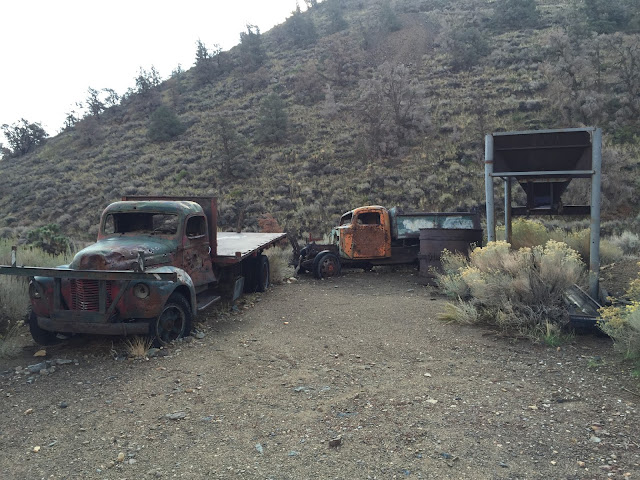 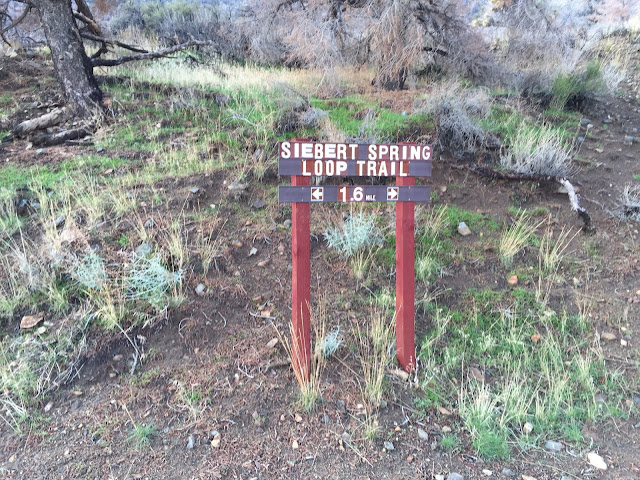 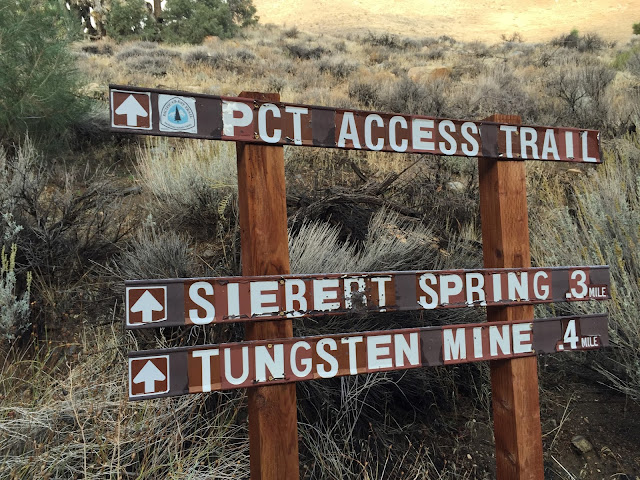 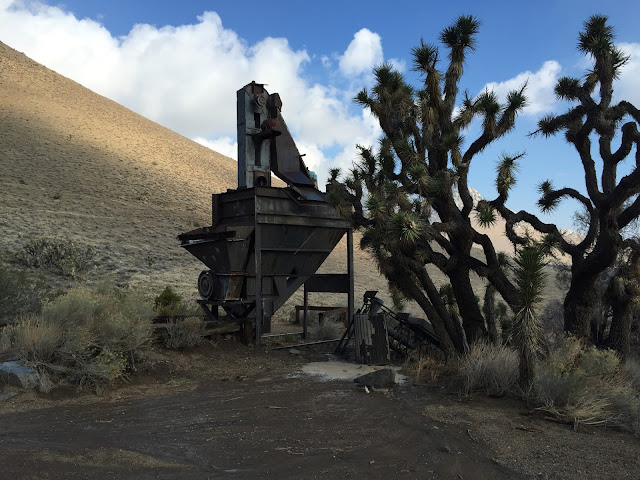 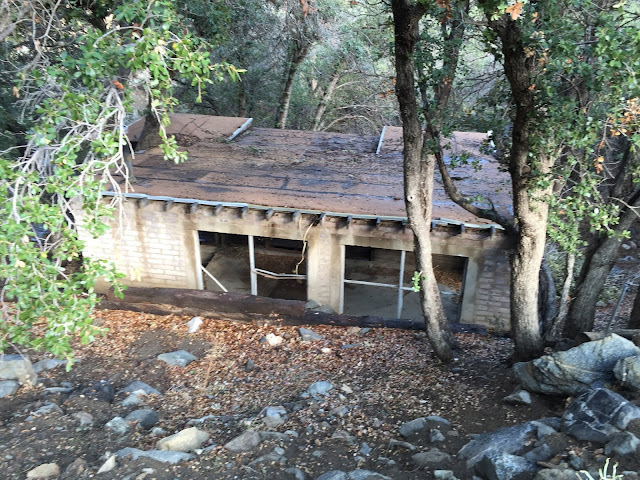 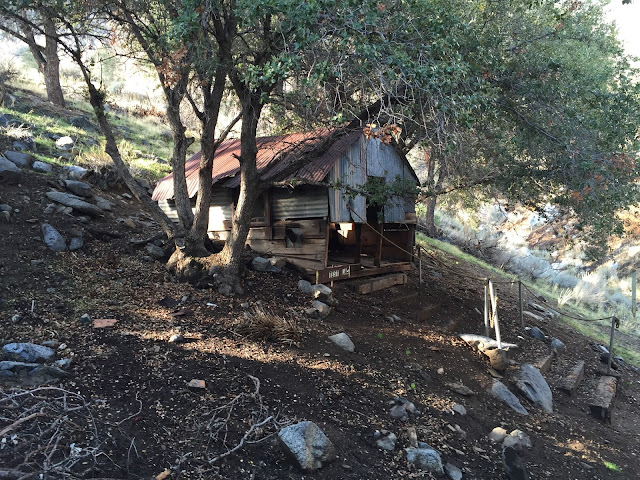 We passed springs along the way, but it was cold and dark there and we could only turn up Ruby-crowned Kinglets, Spotted Towhees, and White-crowned Sparrows.  At the Nadeau-Magnolia Mine we had high hopes for Oak Titmouse, but the wind was up and the clouds were turning the peaks into a fog bank.  So, we decided to save the cross-county route to the PCT for another day, and headed back down one of the washes.  Our one highlight in that area of the canyon was a couple of Pine Siskins, which had been unrecorded on the Indian Wells Canyon eBird list.  The clear lowlight was the number of dead pinyon pines, up to 80% have died in the last few years from too little rain and too many bark beetles.
Eventually the sun found us again, and we found the birds - mainly White-crowned Sparrows - but we did locate a pair of Le Conte’s Thrashers at 4000’, and Purple Finch, new for the canyon.


Our eBirding efforts put the Indian Wells Canyon list to 137.

Posted by Bob Steele at 1:15 PM No comments: