We repeated a hike from October, a great training hike not too far from home on the PCT. This one leaves from Walker Pass and summits Mt. Jenkins. I wasn't planning to blog a repeat hike but the conditions we found make it worthy of a post. It was simply a winter wonderland! A winter storm had passed through the day before - cold and very windy with minimal fallen snow. The trail walking was easy and we made it to the summit without any problems.  I don't know a thing about ice formations but I suspect from the formations we saw that just about every condition possible was represented - hoar frost, rime ice, advection frost, you name it. We've hiked in lots of wintry conditions but some of these formations were like nothing ever encountered.  Simply stunning!

From a birding standpoint it was a slow day with a few small flocks of juncos, one calling Canyon Wren, a couple of Oak Titmice struggling to make a living in the cold, a few vocal Mountain Chickadees high up on the mountain slope, and a few other odds and ends. The standout bird of the day was the Northern Pygmy-Owl that Susan spotted sunning itself in the afternoon at the top of a pine just off the trail.  What a treat! 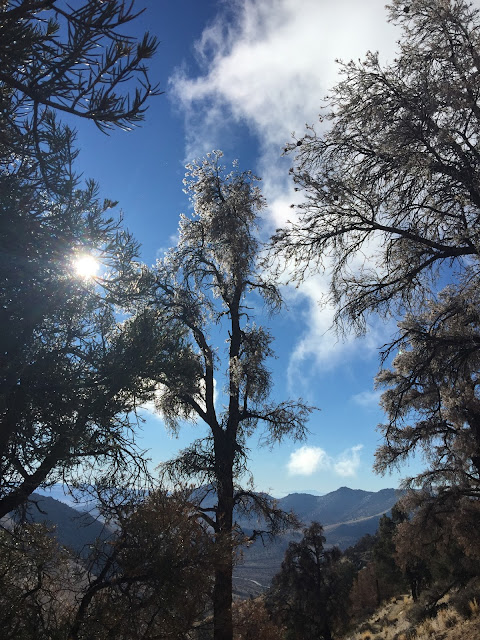 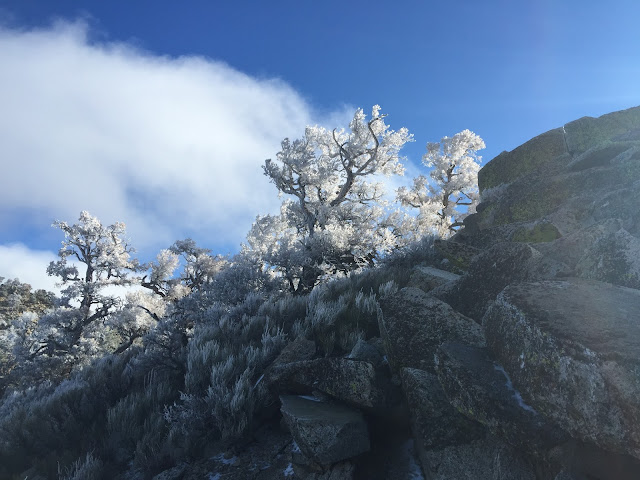 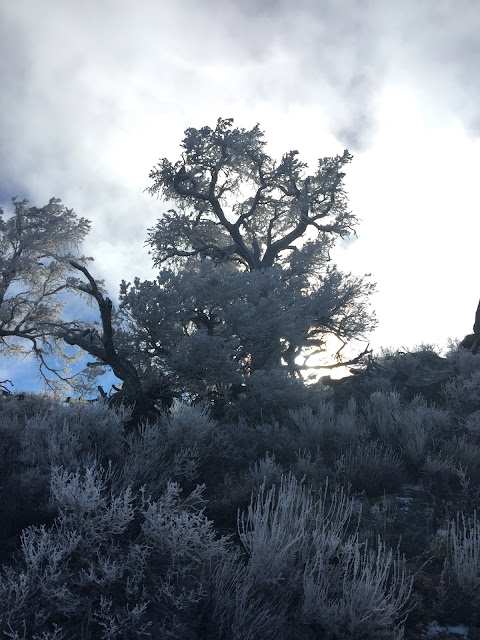 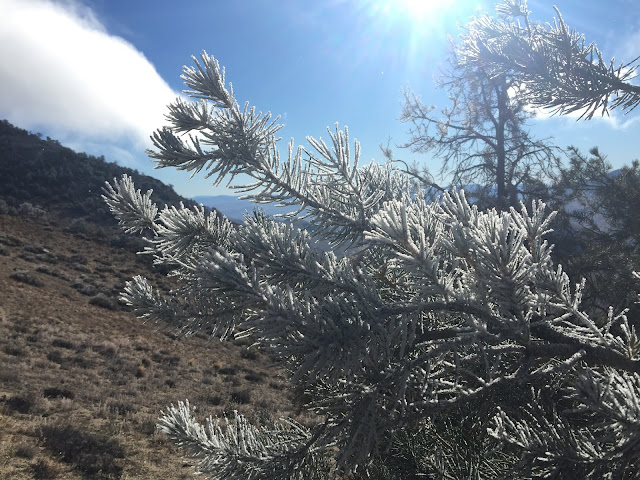 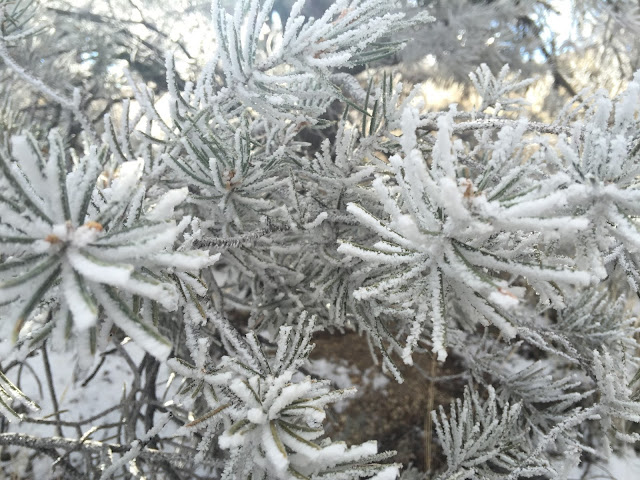 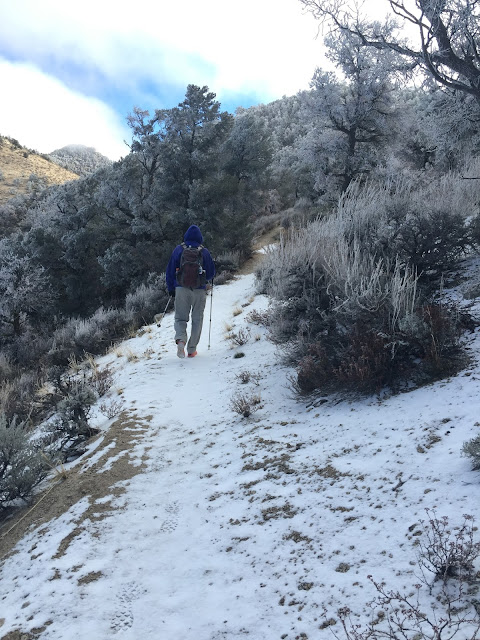 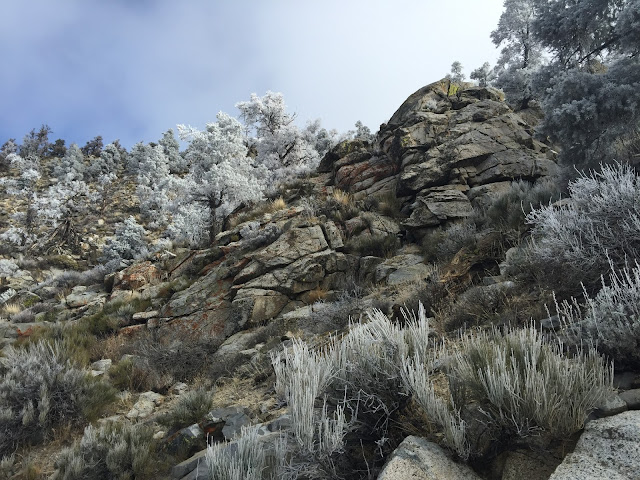 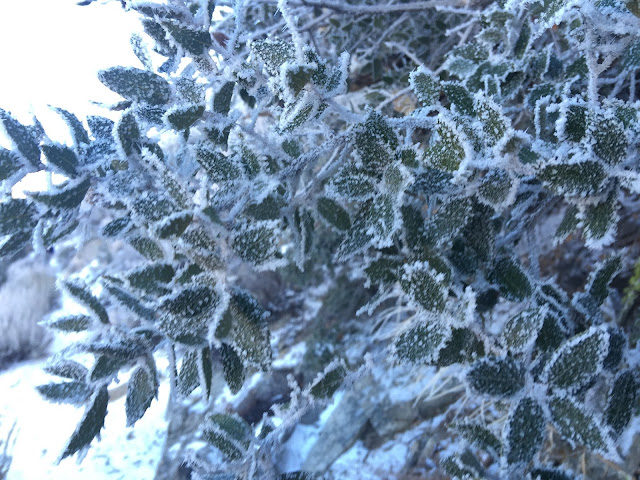 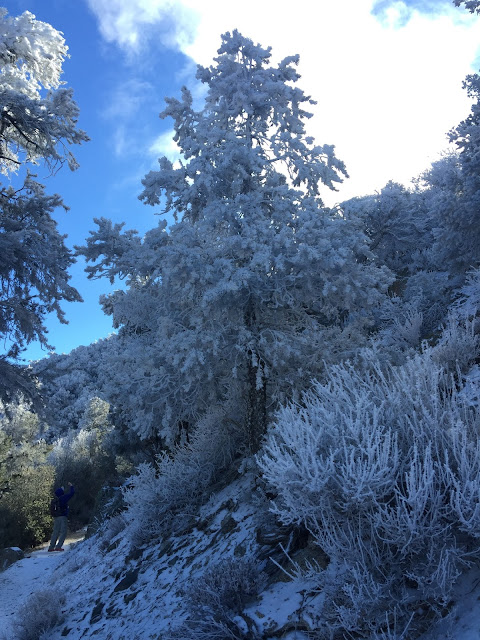 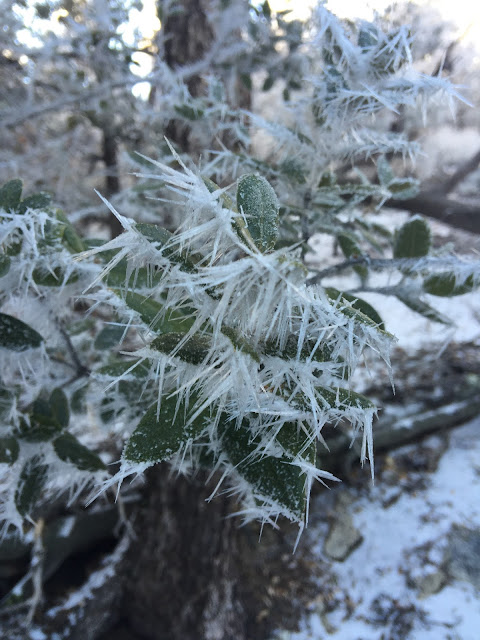 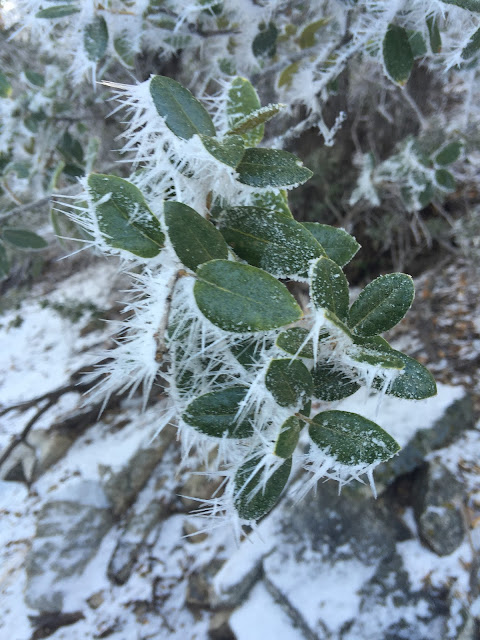 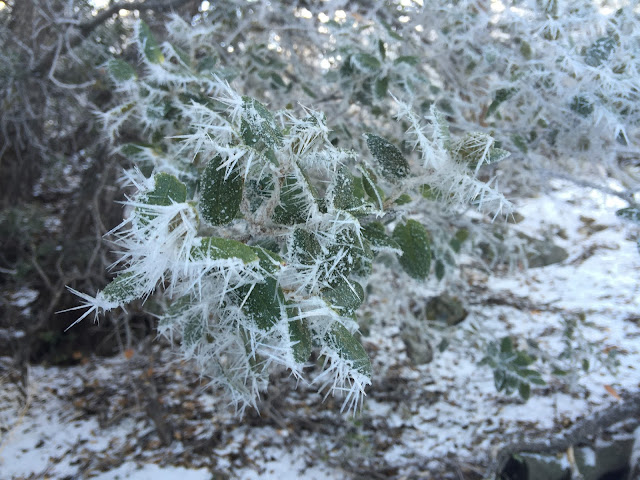 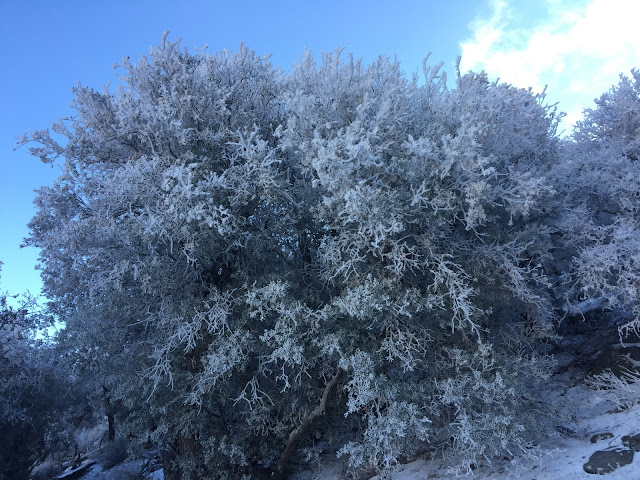 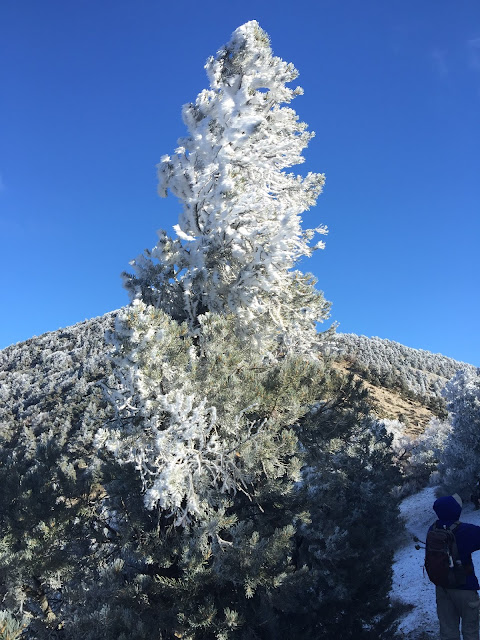 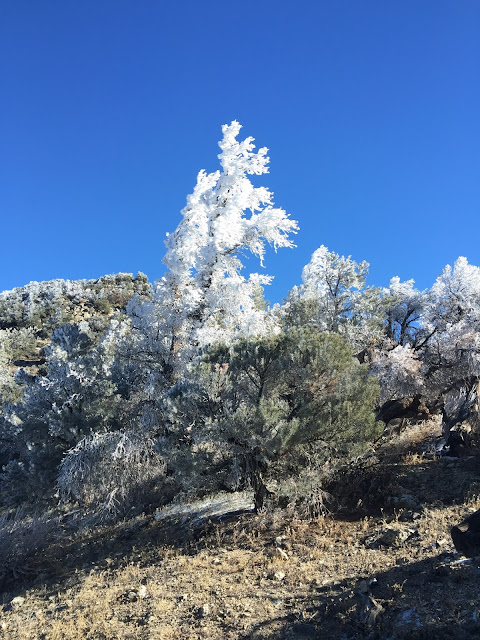 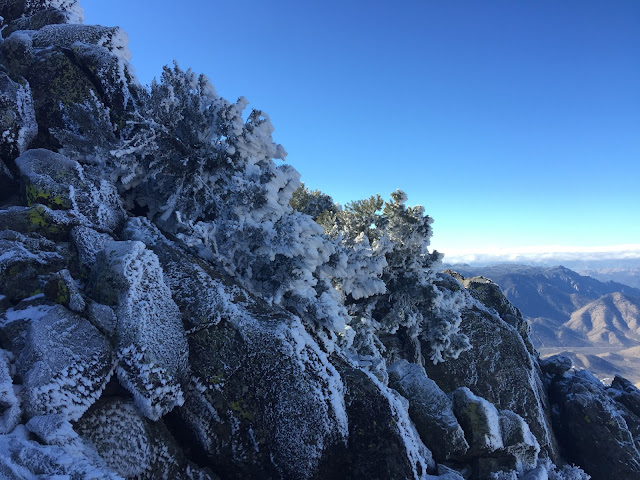 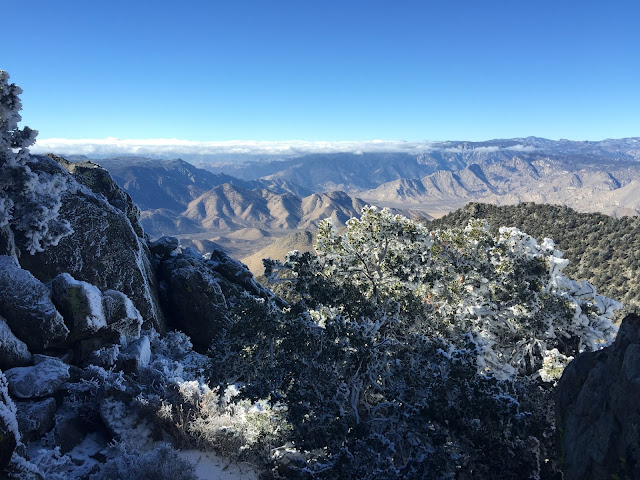 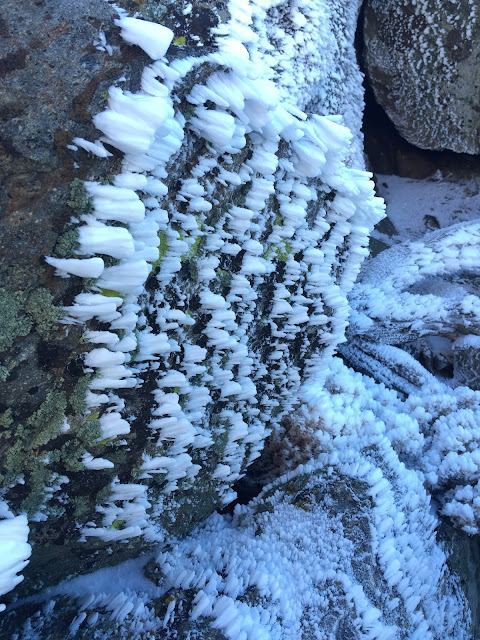 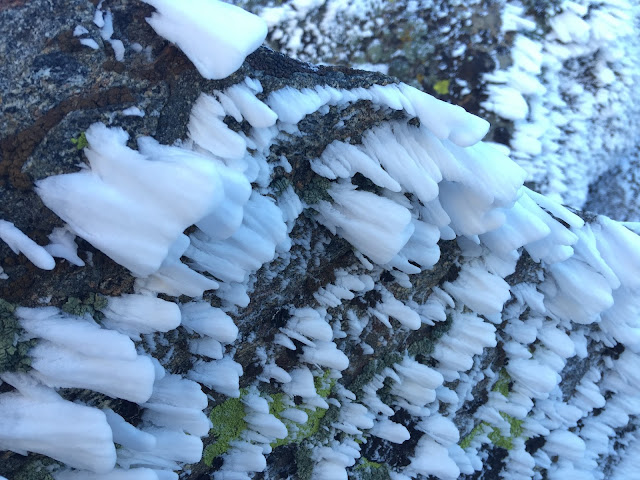 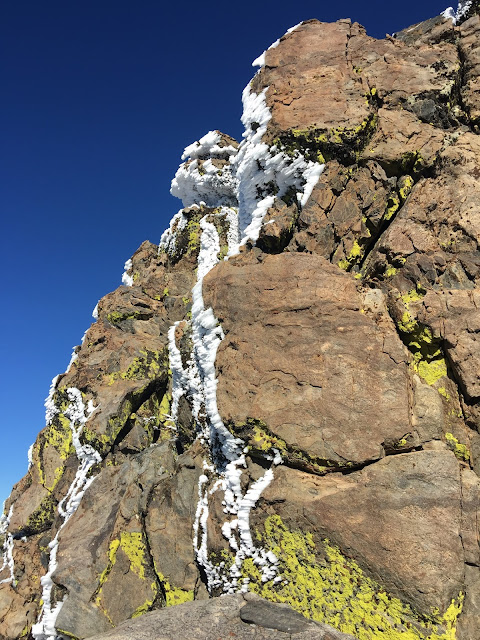 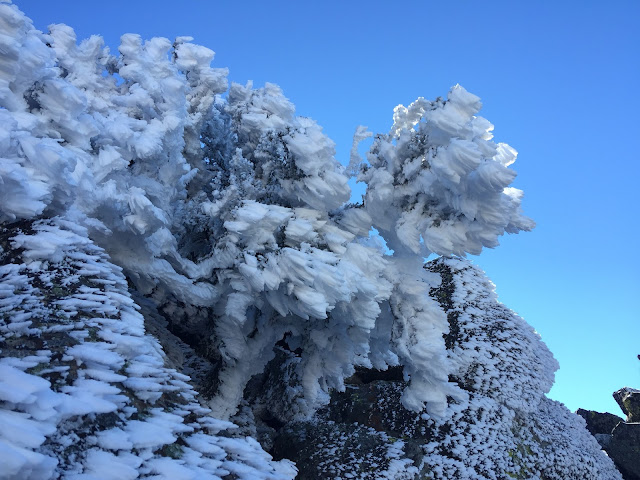 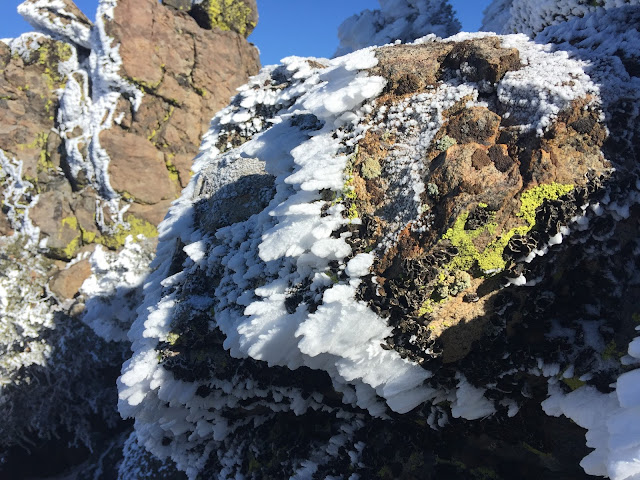 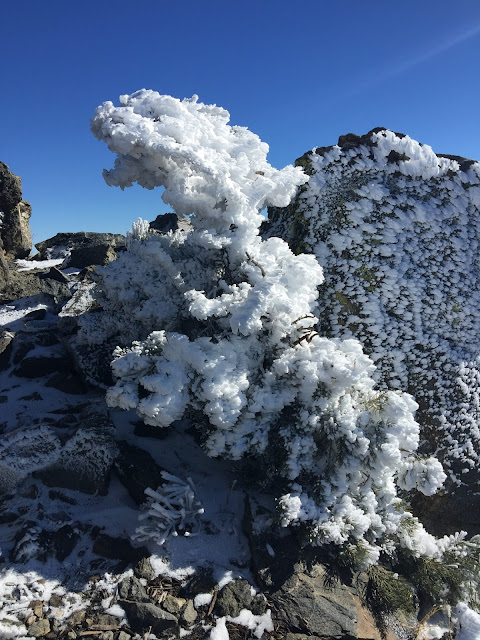 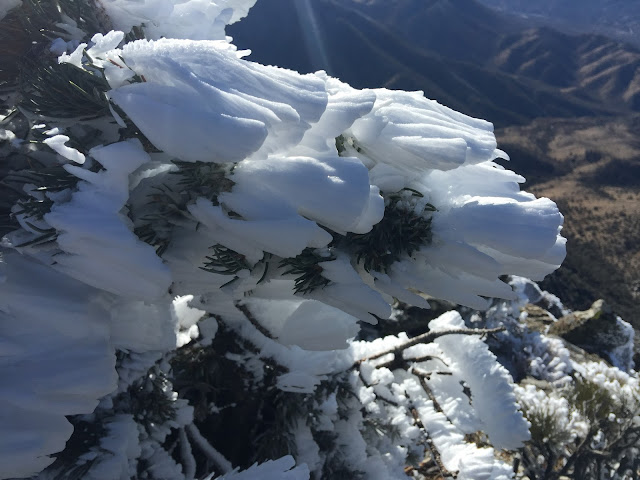 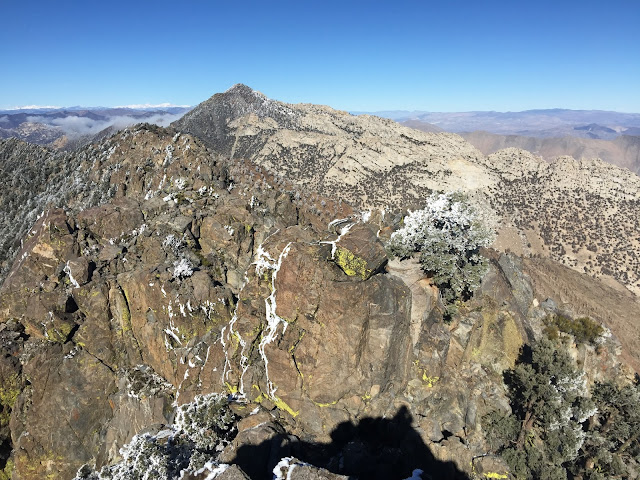 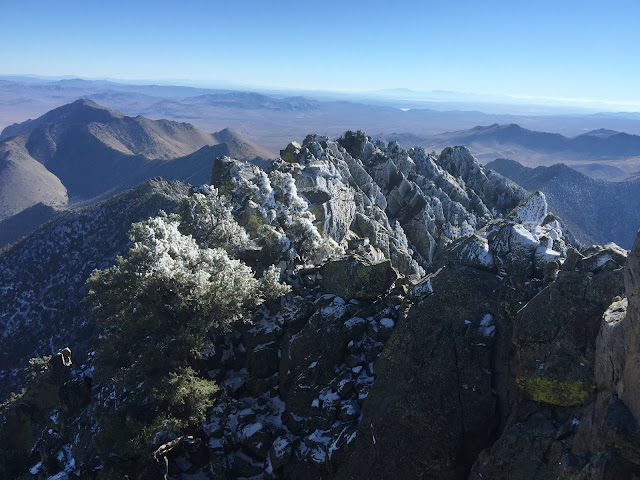 Freeman Canyon
PCT West Side
Indian Wells Canyon
Posted by Bob Steele at 5:22 AM No comments:

As the days get shorter and winter snow flies it gets tougher to keep the dirt hiking muscles in shape, and especially feet conditioning for long miles. With only 4 months before we start our Pacific Crest Trail adventure, we must keep in shape! This last weekend our friend Hikin' Bill took us out for a good thrashing near Bishop - connecting a loop between Redding and Poleta Canyons that included nearly 4,000 feet of elevation gain, and of course an equal amount of quad punishing descent.

We started a short distance up from the mouth of the canyon at an elevation of 5,000 feet. Redding has year-round surface water and many riparian patches as you move up canyon. It can be fantastic birding in the right season, but December isn't that. Bill and Susan bet that we'd scrounge up only 10 species in the canyon, I took 15. When it was all said and done (and thanks to Susan's special find), I just barely won the bet with out total reaching 13. Winter birding in riparian canyons can be fairly bleak...  All that said, it wasn't far up the canyon with Susan in the lead that she pushed a Virginia Rail ahead of her, it walking basically in the middle of the jeep road until it high-tailed it into cover along the creek. That was definitely the bird of the day.

We continued up canyon and the jeep road ended at a closure leaving us to follow the overgrown remnants of the road until it finally became nothing more than a track in the bottom of the canyon. The views continued to improve as we neared the head of the canyon. The top of the canyon is very steep and includes a dry waterfall that must be negotiated to reach the mostly level plateau.


Reaching the head of the canyon we were able to traverse north to an old mining site along the edge of Poleta Canyon. This set us up for a beautiful and relatively easy descent in a tributary drainage to the main Poleta Canyon.

Birds were few and far between in our descent canyon, but we did pick up a pair of Juniper Titmice in the pinyon forest far from where we know they reside several miles away, closer to the road into the Bristlecone Forest. Reaching the bottom of this drainage we connected with the motorcycle track in Poleta Canyon, then joined with a jeep road as we continued along the ridge high above the bottom of the canyon. Reaching a point on the ridge directly above our car, I suggested a cross-country drop that would avoid several miles of needless detour to the mouth of Poleta, down canyon from our car in Redding. I don't think my hiking companions were too fond of the 600 foot drop on precarious footing, but I thought it was a fun!

Posted by Bob Steele at 5:54 PM No comments:

Walking off the Turkey

Two hikes this past weekend to shed some holiday calories...


This obscure canyon on the west side of the Indian Wells Valley is only a few miles from home, but rarely visited. It is part of the Southern Sierra Desert Canyon IBA (important bird areas).  There are a couple of large in-holdings of land with active homes that discourage most from hiking or birding the canyon. But if you know the tricks to avoiding the private property, this interesting canyon can be explored into some relatively uncommon habitat for our desert canyons.

We always park near the gates to the private properties, off the road in an obvious parking area. Skirting the south side of the property lines on a nice use trail, the path starts out in the typical mixture of Joshua Trees and desert sages, but quickly gains elevation to extensive stands of Gray Pine and huge oaks. After about a half mile we reached the small cemetery. After that the trail obscures becoming a mixture of game/cow trails. It is still easy enough to aim up canyon and avoid private land.


The sun comes up late in winter in these steep walled canyons, so birding was slow for a while. We saw the expected Bell's and White-crowned Sparrows immediately. At the first stand of pines and oaks we had a tough time finding much. But as the temperatures rose the bird activity did as well. By the second stand of trees things were hopping and remained so for the rest of the hike. Of particular note - Susan spotted a little puff ball in the top of a large pine, on further investigation with binoculars became a tiny Northern Pygmy-Owl hanging out and enjoying the warm sun on a cold day. West side Sierra Crest influence dictates some of the vegetation and species in these canyons as birds leak over and take up residence in the right habitat. Within all the large pines and oaks we found two pairs of Acorn Woodpeckers, Oak Titmice, a couple of Western Bluebirds, and many Western Scrub-Jays - all species that are tough to find outside the canyons on the west side of the valley.


We worked our way up canyon along the south edge until it got very steep and explored the extensive vegetation at the head of the canyon. We pushed up a large flock of Pine Siskins feeding on the catkins from introduced Alder trees mixed in with native cottonwoods and willows. Turning back down following a slightly different x-country path along the arroyo for a while, we walked along wonderful habitat of pines and oaks, with much of the namesake grapevine hanging everywhere. A short distance later we were back at the car with a very respectable list of 26 species.


Indian Joe Canyon is located near Trona in the Argus Mountain range, an area with a rich history in mining - all the way back to the original "49ers." The springs in the upper parts of the canyon are part of the California Department of Fish and Wildlife Indian Joe Springs Ecological Reserve. The Argus Range is the only home for the endangered Inyo California Towhee, a breeding range isolated subspecies. The canyon has permanent year-round water, even in the driest of years. John Searles, the founder of the borax mines that continue as a commercial operation in Trona today, planted fruit and nut trees to feed the workers around several of the springs in the 1870s. In 1904 Indian Joe Paterson moved into the canyon with his family for many years.  The "No Trespassing" signs that exist to this day date back to that era.  It is safe to ignore the historic graffiti.


A primitive road went all the way to the lower garden springs but is long gone now with erosion and rockfalls. Thanks to the many wild burros in the area the trails are kept fairly open and navigable with some scrambling and route-finding occasionally necessary.


We reached the lower garden after about a mile and a half.  This spot is choked with remnant fig and other trees, and the birds did appreciate it. The place was hopping with activity. Half a dozen Chukar were spooked out of the trail in front of us. A Hermit Thrush enjoyed the cool shaded surroundings of the spring.  One each, Red-breasted and Red-naped Sapsuckers, chased each other from fig to fig. A pair of Canyon Wrens had a territory just down canyon from all the trees, an idyllic spot if you're a Canyon Wren. White-crowned, a Golden-crowned, and Sage Sparrows were seemingly everywhere.

We continued over the ridge toward the upper garden viewing it from above as we moved farther up canyon following historic miner trails now well used by the local wildlife. We passed by Allen Springs and then Bainter Spring farther up canyon. At this point we were just wandering, following the most obvious trails toward Great Falls Basin to the north. We made it far enough to see into the canyon where the road to the parking area for the Basin and called it good enough. Someday we will connect the two trailheads.


After reversing course we diverged the route for a while just past Allen Springs to walk through the upper gardens area. There was nice open water springs with plenty of birds about. A flock of Black-throated Sparrows mixed with the other sparrows in the canyon.

We made it back before the sun had set too low. It was a fun day in an area worthy of much more exploration.